The Turbo 360 platform is the fastest, easiest environment for creating and deploying full stack Node/Express sites. Our collection of tools and code templates abstract away repetitive tasks and infrastructure concerns (such as scaling and SSL integration) so you can focus on creating great projects for your job, clients and for yourself.

Make sure your machine runs an up-to-date version of Node JS. Then install the necessary libraries globally to run the Turbo build commands (NOTE - "sudo" is not necessary on Windows environments):


Next, install the Turbo CLI:

In order to confirm that your Turbo installation was successful, run the following command:

Your terminal should output the following:

To scaffold a new project, open your terminal and type the following:


Next, change directory into the project and install dependencies:


This scaffolds a base Node/Express application with configuration settings for the Turbo hosting environment. The base project is "opinionated" in that a handful of options are pre-set such as:

These settings can be changed and the initial scaffold serves as a "starting" point for a project right out of the box.

then navigate to http://localhost:3000 which should show the following: 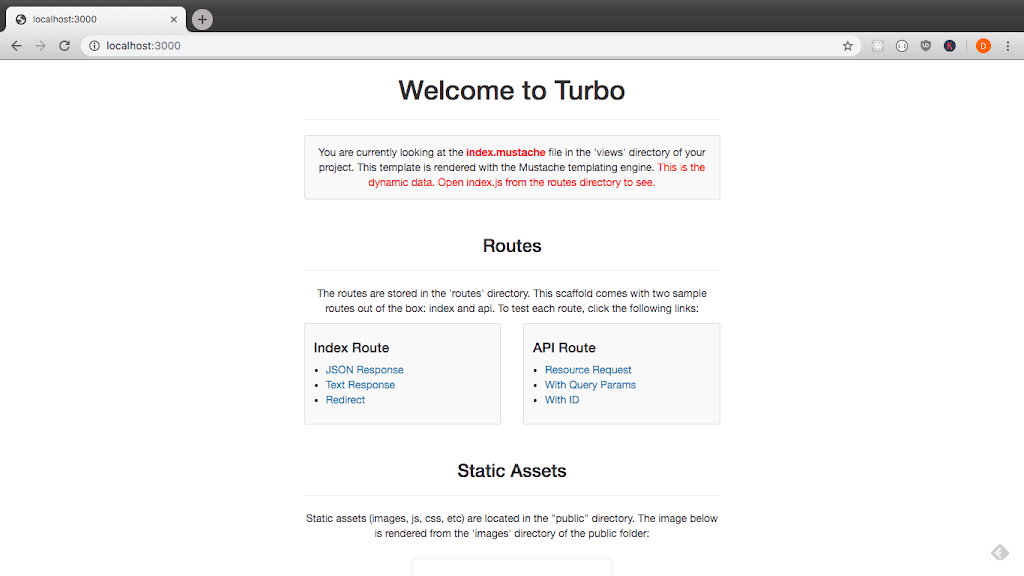 To turn off the devsever: CONTROL + C

To connect your local source code to the Turbo 360 staging environment, create a project in your Turbo dashboard by filling out the area shown below and click "CREATE SITE": 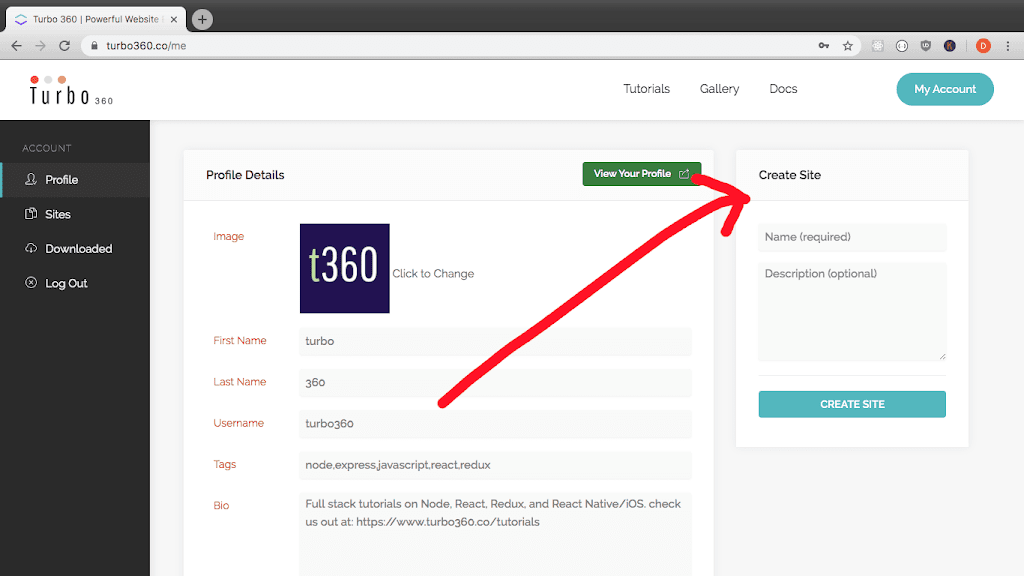 Back in the terminal, login to your Turbo account using the CLI:

Then from the root directory of your project, connect your local source code to the project on Turbo:

This will prompt you to enter the SITE ID and API KEY for your project. Head back to the Turbo 360 dashboard and on your site admin console, find those two values in the area shown below: 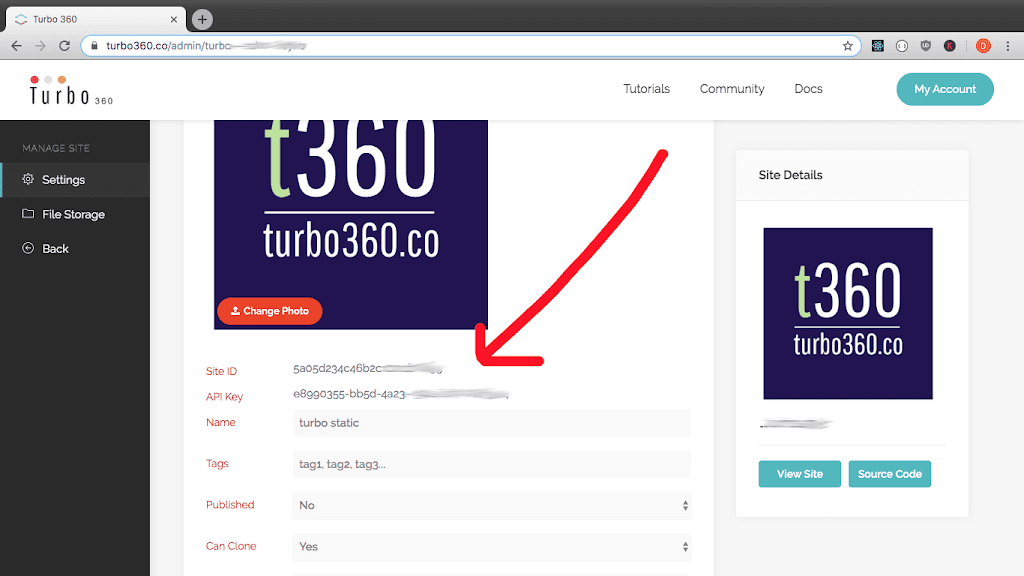 When the deployment is complete, a staging link will be provided in your terminal. Copy & paste that link in your browser and you should see the same home page from earlier but now on a live staging server! 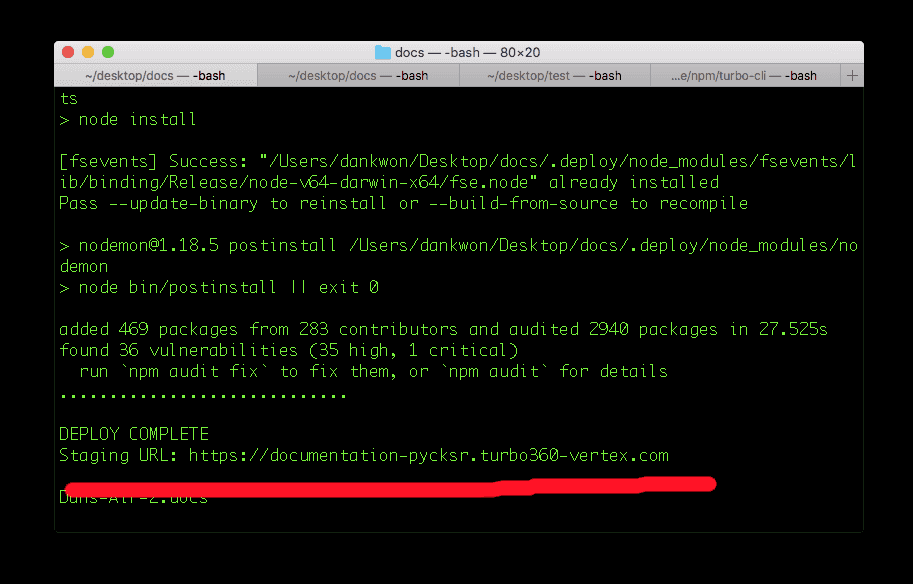 The Turbo project structure closely follows the patterns and conventions of a Node & Express architecture. View templates are stored in the /views directory and route logic is under the /routes folder. 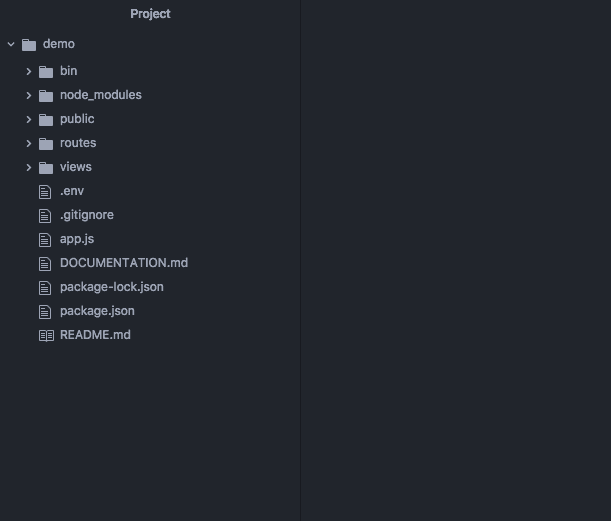 The route files determine how your app responds to incoming requests. Routes can render plain text, JSON, a view template or redirect the request to another url. Route files are stored in the ROUTES directory and connect in the app.js file of the root level like so:

FILE: app.js
In this snippet, the route files are imported on lines 33-34 and connected on lines 37-38. A sample API route rendering JSON is shown below:

In line 7, 'about' refers to the mustache template about.mustache in the /views directory. The JSON object passed in the next argument, {text: 'This is about page'} provides a source of dynamic data that can be rendered in the template. To do so, the the template itself should contain placeholders to render the data like so:

In this example, the dynamic text is rendered in line 12 and when loaded into a browser, looks like this:

Static assets (images, pdf, js, css, etc) are stored in the Public directory. When linking to static assets in templates, the 'public' directory is implicit.

Turbo 360 provides you with the opportunity to customize your project site's config options.
FILE: app.js


Note: Currently, Turbo only supports MongoDB as a database configuration.

A Turbo 360 project can also be "extended" with configurations that add more functionality "out-of-the-box." For exmample, you can add a React with Redux integration to your Turbo site with the following command (from root directory):

This adds a React with Redux base project onto your app including the required packages in the package.json file. It also installs the new packages and runs the build script in order to ensure the source compiles properly. The React and Redux source code is located under the /src directory in the root level of the project. A webpack config file is also provided in the root level and the index.mustache file under the /views directory is where the compiled React source is mounted. 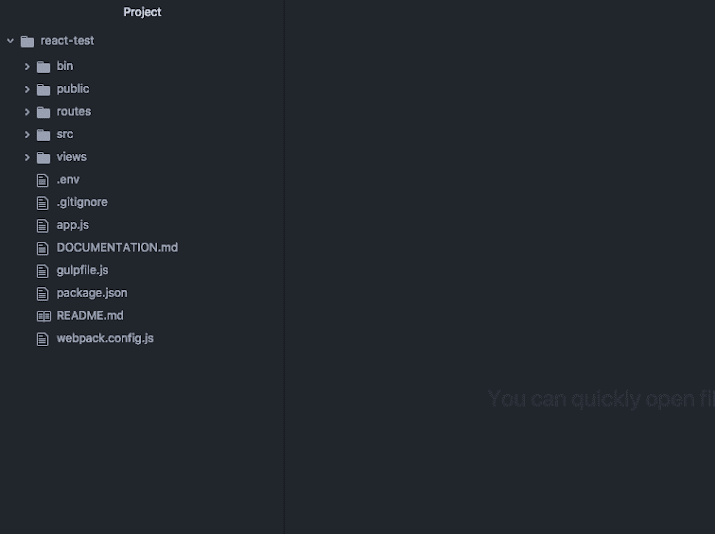 Turbo 360 projects support the following extensions to speed up your development flow:

* if you have a request for an extension, please email Dan at dkwon@turbo360.co

In addition to scaffolding projects from scratch with the Turbo CLI, you can clone projects by directly downloading source code, then connected the project to an environment on your account and redeploying. 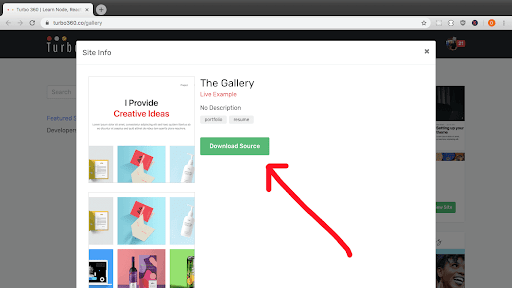 This will download a ZIP file called "package.zip" which contains the source of the selected project as constituted on the current deployment. Unzip the file and remove the "node_modules" folder. Then open your terminal and change directory into the root of the project and reinstall the dependencies:

When the dependencies are installed, run the dev server and navigate to http://localhost:3000:

This should show the same site now running locally on your machine.

In order to deploy the project on to your Turbo account, the environment from the original site needs to be cloned to your account. To do so, navigate to your account page on Turbo and select the "Downloaded" option on the left-side menu bar: 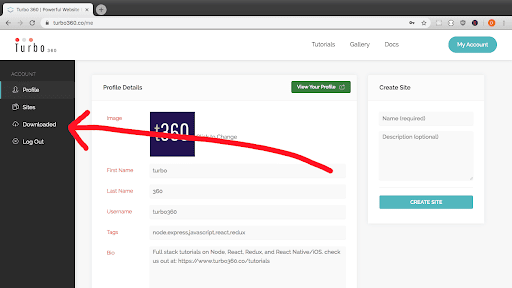 Select the site that the project was originally downloaded from and click the "Clone Environment" button: 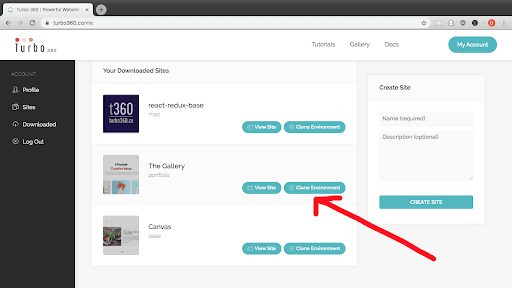 This will prompt you to enter a name for the environment. Enter a name then click the "CLONE ENVIRONMENT" button. This will create a new site with the same configuration as the original site that your project was downloaded from.

The deployment process is the same for any other Turbo 360 site. First, we connect our local source code to the staging environment by navigating to the root directory of the project and entering the following command:

Vertex 360 is a complementary platform in which Turbo projects are augmented with visual editing tools as well as a robust CMS system. Several templates on Turbo 360 are formatted for the Vertex management console which are divided into the following areas:

Vertex templates are indicated by the green stripe shown in the screenshot below. By cloning a Vertex compatible template and redeploying it on your environment, you gain access to the editing tools and features above. 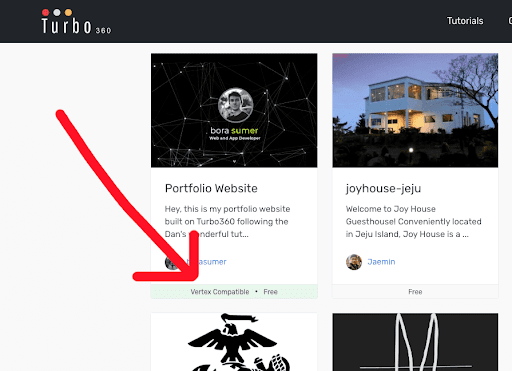 If you have any questions, comments or feedback, feel free to contact us at matthew@turbo360.co